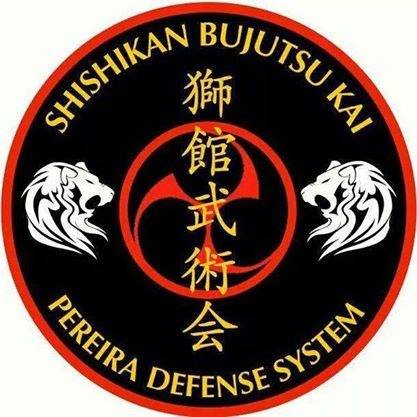 The Shishikan system has evolved tremendously over the years and so has its patches. We have had a few different version of a crest however as we all
know things change and grow. As the system itself has mad many new strides and adjustments the core elements never have changed. At this point most of you I know all of my students know what Shishikan translates to and why I have chosen the name for our ryu.

lets break down the patch so everyone can further understand its deep meaning to me because to me it isnt just some patch i slap on people. If you have this patch this logo on a hoodie, gi, hat, shirt know that you are representing everything this patch means to me. Lets take the colors as you can see red, black and gold are the colors of the ponce town flag. which i incorporated in the patch to show connection to roots. also the red represents the blood we shed in our training  the blood we are willing the shed to defend our kai the blood brothers we become once we are in the system the blood that we can shed if we have to and  the red of the grand masters belt .

gold will always to me represent prestige power worth regalness the elite. the black is the void the everything and the nothing also who wears black? judges, executioners, the grim reaper strong and bold.

the white lions have a few distinctions white we all know  is the color of the beginner the open mind the purity of heart. the white lions look over the system watching it grow the two leos ( my parents)

lastly the tomoe the spining wheel behind then kanji it has many meanings The Hidari Gomon was once the Royal crest of Ryukyu Kingdom in Okinawa. In Japanese it is called the hidari mitsudomoe and is a common design element in Japanese family emblems (家紋) and corporate logos. The Hidari Gonon is the primary traditional symbol of Okinawa. It is unclear who used the symbol first, but it has special significance to the Okinawan people, especially those practicing karate. The Koyasan Shingon sect of Buddhism uses the Hidari Gomon as a visual representation of the cycle of life. In Shinto the symbol is often used to signify Heaven, Earth, and the Underworld.

There is an Okinawan folktale in which Hidari Gomon represents loyalty, heroism, and altruism. It implies a past full of struggle and hardship, but also a willingness to face difficulties, no matter what the cost. for us this also combines mind , body and spirit. Speed power precision also love family and unity.


the kanji shishikan bujutsu kai  the lion house warrior arts group simple that is who we are the house of lions!